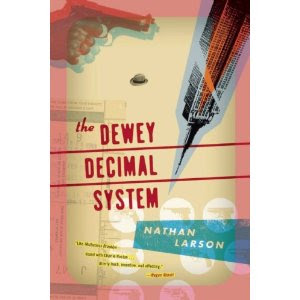 Nathan Larson's debut novel THE DEWEY DECIMAL SYSTEM is a fantastic blend of hardboiled shamus and near-future dystopian elements. Blogpocalypse caught up with Nathan to pester him with a few questions:


1. First thing first. You come from a musical background. Tell us about that?

Yup. I lived in D.C. in the early-mid '80s and as a young un was very much a part of the hardcore punk scene which at the time was really happening down there. In the early 90s, my post-punkish math rocky band got swept up in the Nirvana-era tide of major label signings, which was a wild and ridiculously unrealistic ride till it all came crashing down in the late 90s....luckily for me I stumbled (literally) out of that wreckage into the world of film scoring, cos some directors happened to dig my old band, and off I went down that path, one which I'm still on. It's lucrative and I can see myself doing that kind of thing (making film music) into my middle-post-middle age gracefully, as opposed to trying to squeeze a pair of leather pants over my paunch for the rest of my life. Rock is for the young. And now I have the incredibly good fortune to find myself having written a novel, seeing it published, and experiencing real people actually reading it. I am truly a lucky man and hope this is the advent of yet another chapter for this guy right here.

2. THE DEWEY DECIMAL SYSTEM is your first novel. Tell us about the process of writing it. Are these different creative muscles your using from your musical efforts?

I have to say the mental processes that went into writing this book were very much the same as that which I apply to music, or anything creative really. Not to get too esoteric, maybe you dig this, but I think it was Keith Richards (among many others) who talk about this "mass" or "cloud" of information/ source material/ magic, and all the artist has to do is poke a hole in the cloud, stick in a straw and start snorting (metaphor inspired by Keith). You channel shit. I find I'm able to do this, but only if I sit down to work without giving it a second thought, just do it and not judge it. This requires speed, you're keeping that nasty fucking brain censor at bay, that evil thing that has a constant "you suck you suck you suck" mantra going, you're racing ahead of this bad energy. When I look back on this book I can totally see areas where meticulous "plotting" was sacrificed in order to harness the tempo...I saw a "bad" review of this book that faulted it for losing the plot in the violence, and if that's the case I'm totally ok with it. It's like Chandler says (again I paraphrase): if you get bored send in a dude with a gun. You can always come back later and polish, which to me is almost exactly the vibe one aspires to when making music. It's palpable in the end result.


3. I love how the novel blends a sort of sci-fi-ish near-future dystopia with the hardboiled shamus genre. How did you decide on the setting and approach for this novel?

I didn't exactly decide so much as discover, after page into the thing, that I would somehow have to arrange for spaces to get cleared out for my character. It just sort of emerged. I certainly am a lover of both "genres", and have enjoyed books such as your own GO GO GIRLS OF THE APOCALYPSE or Charlie Huston's NY hardboiled vampire series where something like this setting is presented, so that combination is familiar to me. I resisted the sci-fi-ish element for a while, if only because I simply don't feel like I have the writing chops to adequately describe what a decimated New York City would look like. I'm just not qualified. It's hard enough to do New York City properly as it is.

I recall looking at the remnants of the WTC in late September of 2001 and only being able to come up with "it looks like Die Hard 4 where they blow up the World Trade Center, the movie they shelved cos THIS thing happened....". I just start seeing CGI stuff and that's not interesting at all. Scorpion King bullshit. Feel like we're kind of poisoned in this sense, we're so accustomed to seeing the same-y CGI shit over and over. Tolkien armies swarming over the hill, it's all just algorithms + plug-ins and it all looks the same.

So I tried to keep it hazy, maybe zooming in on a detail but (I hope and pray) leaving space for the reader to fill thing in themselves in terms of the landscape. So to get back to it, it wasn't a choice per se but I'm glad it landed where it did.


4. Tell us about your road to publication and how you ended up at Akashic.

Man full disclosure, I knew the head of Akashic, my bud and publisher Johnny Temple, we go way back to our teen years in bands down in DC...we ran into each other at a party having not seen each other in a while and he asked if I had anything, cos I used to scribble all the time, little stuff here and there and lyrics etc...as it was I did have a super messy longer-form thing I had attempted, so I said sure. Well that particular piece of writing was not happening at all, but Johnny must have seen something in there cos he sat me down and straight up asked if I could do a noir-y kind of jammie. I had the time and just said fuck it I'll go for it. So I feel a tad guilty, I didn't have to do any of the sending manuscripts around + rejection letters slog, the situation I walked into was really pretty ideal and allowed me to write without that added stress on top of my head. I'm very aware of how lucky I am with respect to the way this whole thing went down, very sweet.


5. What fiction do you read? What literary influences fueled the novel?

wow there's a lot of ground to cover here...you know I love the classic noir, Cain, Thompson etc, and I dig jackasses like Victor Gischler (no but for serious I do love your work), Megan Abbott, Charlie Huston, Duane Swierczynski...what do you call what you do? What is it? Is it neo-noir? And of course Ellroy, Leonard, Winslow. Wandering away from that kind of thing a bit I clearly am into Philip K. Dick in a big way, I love William Gibson, J.G. Ballard is one of my faves....beyond that just a random grab into the hat; William Vollmann, Chuck Palahniuk, Will Self, Martin Amis, Daphne Du Maurier, H.P. Lovecraft, Dennis Cooper, Jerry Stahl, Ryu Murakami, Denis Johnson, Sara Gran, Roberto Bolano, Joy Williams, Susan Sontag, Don Delillo, Lionel Schriver, Doris Lessing, Flannery O'Conner....shit I could go on and on.

But I couldn't and didn't read anything fiction-wise when writing....can you pull that off? Except nonfiction material that might relate to an aspect of the book, stuff on Bosnia, Anna Politkovskaya's brave as fuck got-her-killed book on contemporary Russia. Gun magazines, cos I didn't know anything about guns and weirdly got off on reading these magazines. I would go to the newsstand and get GUNS AND AMMO and MODERN PARENTING cos my wife was pregnant at the time with our son (who is now 6 mths) , struck me as a funny combo of mags


6. Any upcoming events, reading, promotional stops you'd like people to know about?

Not sure when this piece is running, but I'm doing a slew of stuff over the next couple weeks....here's a link: http://www.akashicbooks.com/deweydecimalsystemevents.htm

Beyond that I'll be doing stuff in the Fall. Spending most of the summer in Europe prancing around. My wife's Swedish, we have a place there as well.


7. I really like how you hint at certain events in the novel (like the 2/14 stuff) but never flat out tell us what happened. If other novelists did this, readers might punch them square in the balls. But I think you pull it off, and it actually makes the novel better and more mysterious. How did you arrive at this approach? And will these questions be answered in future books?

Yes those questions will be answered, thanks for your kindness, I hope I pull it off ok, again as I mentioned above I wanted to give it more of a sketch-like feel so folks would fill their own mental pictures in, likewise I would like the reader to develop his/ her own theories. Plus I didn't really have an answer until I was nearly finished with this first book. The only problem with what I came up with is that it calls for more books, which isn't really a problem so much as something to get done.

Sly and the Family Stone

9. Three things you love to eat:

I'll have to be place-specific as well:

a big ass helping of anything from Toscanini's Ice Cream, Boston : http://www.tosci.com/

I'm boring in the sense that I dropped alcohol, drug, cigarettes etc (no choice...I cannot have just one of anything I gotta have it all) and I'm kind of one of those annoying yoga guys, I know I know it's boring...

but I couldn't imagine my life without the occasional double macchiato from Gimme Coffee, NYC : http://www.gimmecoffee.com/static/community_stores.aspx

Tied for first: The amazing coconut water from One Lucky Duck, NYC: http://www.oneluckyduck.com/takeaway/

I dig that this come off as fancy-pants-y, I'm just really particular about this jazz and have sought these things out...

As a punk teen it was mandatory that I skated. It was more about hanging out and having the right stickers on your board. I sucked but I gave it my best shot.

I do better as a spectator. I love basketball. I am so thrilled about this recent trade my Knicks made cos it's shot them full of energy, even if they're not gonna get anywhere. Being a Knicks fan (especially through the '90s) is just fucking tragic. Self-flagellatory, Opes Dei style. But if you get the bug you can't help it. I get all misty talking about the Knicks.

Also love "European" soccer. Sorry. I do. It's an awesome game and a total mystery to me why it hasn't gotten much traction in the US, when a huge portion of the world's population lives and breathes the sport. I never miss watching the Cup at the very least, if I'm in the States....they're getting better, the last one was pretty widely televised. I greatly DISLIKE regional UK football, it's just trashy somehow.

Don't understand American football but I'll tell you what, Superbowl 2007 Prince came out at halftime and just fucking destroyed everybody, I mean he KILLED it, I have rarely seen anything that fantastic. One of the best guitar solos I've heard in my life. So much heart. I just watched it again and wept. I'm not scared 2 admit it 2 U : http://www.youtube.com/watch?v=4QKajzKmyhw&feature=related

12 Tell us about your next literary effort. Will we see Dewey again ... or something new?

Yeah Dewey is coming back to do his thing, I'm well into book 2 and now have an sense of what book 3 will look like, so I guess I'm down for a "trilogy." The word "trilogy" reminds me of Rush or some kinda prog-rock concept record but there it is. I am definitely not done with Dewey Decimal, I love him like a brother and he's not done with me either.
Posted by Victor Gischler at 5:16 AM

Cool interview. So looking forward to this book! Going to get my copy tonight at Book Soup.