Finally there is rain. No wind. Nothing like a storm. But rain.

Sirens continue all over town. The radio announcers say not *if* the power goes out but *when.*

It begins.
Posted by Victor Gischler at 6:36 PM 1 comment:

What with all the hurricane stuff, I've been remiss in mentioning that excellent author Tom Piccirilli has posted THIS INTERVIEW with yours truly. Check it out.

Thanks, Tom. You da man.
Posted by Victor Gischler at 3:03 PM No comments:

I've been hearing sirens all day up and down Government Street. Seems strange to me since there's still no sign of wind or rain. Maybe car wrecks from people running around for last minute supplies. I don't know. I refuse to leave my house.

In accordance with state and local officials and F.E.M.A I will later be grilling spare ribs.

Contra-flow began at 4:00 a.m. this morning, all the traffic moving away from the storm. The sky still does not look hurricane-ish. Radio announcers sound more and more serious by the hour.

Later this morning I will go outside and secure loose items around the yard and house to cut down on the flying debris factor.

In the middle of all this, I'm still hammering on final edits for the next novel.
Posted by Victor Gischler at 5:58 AM 3 comments:

A sort of orderly craziness at the Albertson's as people stock up.

I have water, food, batteries and shotgun shells.

I will be signing books at the brand new Borders near the Mall of Louisiana at 4:00 this afternoon. Show up for a signed book or just to visit or to bring me a meatball sub.
Posted by Victor Gischler at 8:48 AM No comments:

New Issue of PLOTS WITH GUNS

If you loves ya some hardboiled short fiction, then check out the new issue of PLOTS WITH GUNS.

Posted by Victor Gischler at 3:15 PM No comments: 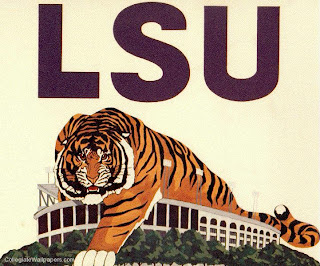 The storm is still a long way off. But Baton Rouge big-wigs will meet today to discuss if Saturday's LSU football game will be postponed or not since the game traffic might complicate the evacuation traffic.
Okay NOW the storm is really getting inconvenient.
Posted by Victor Gischler at 5:34 AM No comments: 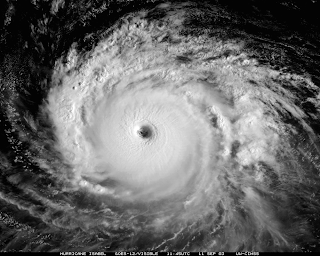 Well .... not yet. But it's coming this way. Baton Rouge is right in the path, so most likely it will turn one way or another and hit 50 miles away. But I'll be right here to report all the pulse-pounding action. (Provided I have electricity.) If I lived in New Orleans, I'd be packing the car, but since I'm in a non-flood part of Baton Rouge I'll stick around mind the homestead.
More as developments ... uh ... develop.
Posted by Victor Gischler at 9:14 AM 3 comments: 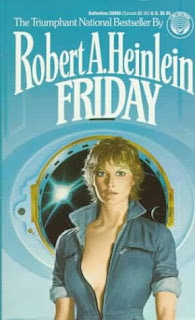 In the previous post a brief (but nice) discussion about which of Heinlein's books were better than others got me wondering. I've read most of his novels, but never got around to Friday. Anyone want to convince me to read (or not read) this one? Opinions please. I appreciate that the girl on the cover looks like she's about to fall out of her clothing, but I'm not sure that's enough to get me to pick up a copy.
Posted by Victor Gischler at 2:57 PM 5 comments: 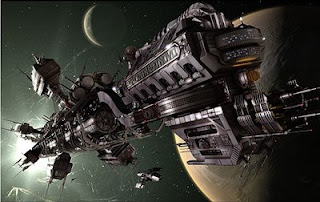 Purely subjective and in no particular order:

1. Do Androids Dream of Electric Sheep by Philip K. Dick
2. Doomsday Book by Connie Willis
3. Santiago by Mike Resnick
4. Beggars in Spain (and sequels) by Nancy Kress
5. Lucifer's Hammer by Niven & Pournelle
6. Altered Carbon by Richard Morgan
7. The Moon is a Harsh Mistress by Robert Heinlein
8. City of Truth by James Morrow
9. The Hitchhiker's Guide to the Galaxy (and sequels) by Douglas Adams
10. Worlds (and sequels) by Joe Haldeman

Thanks to David Montgomery for this great mention in the Chicago Sun Times. He says some generous things about me and Go-Go Girls of the Apocalypse. I now fully expect all Sun-Times subscribers to rush to their favorite book stores to order several copies.
Posted by Victor Gischler at 6:11 AM 1 comment:

Chime in with a suggestion please.

Summer has been the best kind of hectic. Buzzing around Texas and playing golf with fellow wordsmith Anthony Neil Smith while hitting various signing events has only been part of it. I've also written an arc of Punisher Max, finished a short story for an anthology, and I've just over the last couple of days put together a synopsis or three which I'm hoping will eventually become novels. Time will tell.

I've also just completed a feature-length screenplay. It's an adaptation of my short story "Silent Harvest" which appeared in the anthology North Florida Noir. I wrote the screenplay specifically to be shot with a small budget in mind. Deciding right now the best way to show it around.

I hope everyone else had a fruitful summer as well.
Posted by Victor Gischler at 11:21 AM No comments:

Check me out at In For Questioning.

You say you want a revolution?

Then click over to Revolution Science Fiction for this great Go-Go review!

Thanks, Jay!
Posted by Victor Gischler at 5:08 AM No comments:

At THE RAP SHEET.

I want to thank the cool folks at BOOKGASM for THIS. Thanks to Gorjus over at Pretty Fakes for THIS.

Posted by Victor Gischler at 8:28 AM 2 comments:

Thanks to Jim Winter for his kind words about Go-Go Girls of the Apocalypse!
Posted by Victor Gischler at 5:36 AM 1 comment: