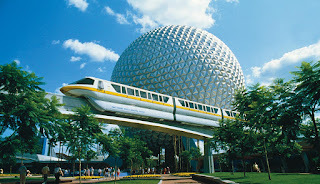 There is actually no point at all to this blog post except to talk about Epcot.  Why?  Because I like Epcot.  It's really that simple.  It's my favorite of the Disney parks in Orlando.  My good pal author Anthony Neil Smith tells me Epcot is his least favorite park because it is woefully out of date and showing it's age.  I don't completely agree with this, but I do see his point when I'm over by the 3D show (are they still reviving Captain Eo?) and that terrible Figment imagination ride.  So, yeah, I get it.

But the reason I love Epcot more than the other parks (although I like them too) is that as I am now squarely into middle age (which may or may not have anything to do with it) I find that I am much more about relaxation and entertainment than I am about rides.  I mean, I like the rides, and I wouldn't want to leave Epcot without hitting Test Track and Soarin', but I'm much more keen to wander at a slow crawl around the World Showcase with a beer in my hand, taking in the entertainment.

I was sorry to hear that Canada's rock-n-roll bagpipe and kilt band (I don't remember their actual name) had moved on.  Used to love those guys.  But there is still plenty of good entertainment opportunities around the World Showcase.  A mariachi band in Mexico sounds a little corny and cliché, but why not while you're enjoying a cold Mexican beer?  In China they have acrobats.  There are street performers in the UK and a British Invasion band at the rear of the pavilion.  The band shell across from the American Experience usually has something going on.  The Japanese drum show is cool.  I like to start around lunch time, make an afternoon of it, and then finish before the wave of evening tourists. Staying through dinner is a good option, but often I leave before then. 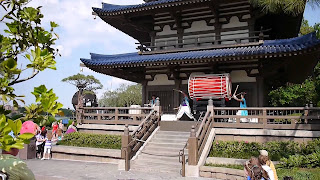 And when Epcot hosts the Food & Wine Festival, you can crank the whole experience up to eleven.

The last time I was in Epcot I was all by myself (I was there to run a 5k) so I eased through the World Showcase at my own pace, taking it in at my leisure and NOT standing in line for an hour for rides.  So ... like I said.  No real burning need for this blog post. No amazing insights.  I just like Epcot.

In the film racket, "stupid" and "hopeful" probably look the same from a distance.


What do I mean by that?  I guess what I mean is that most writers know getting his/her work made into a film is a long shot.  Such a long shot that putting any time or energy into it probably seems ... well ... stupid.  And yet writers do it all the time.  Are we stupid?  Hopeful?  Both?

Example:  A few months ago I put the scripts for all five issues of my creator-owned comic Sally of the Wasteland into a single file and then dumped that file into Final Draft  the popular "industry standard" screenwriting program.  I would like to say that the program instantly transformed the comic book scripts into a film screenplay, but that would be a whopper of a lie.  Still, if you squinted just right, the document did look a tiny bit screenplay-ish.  I spent some time (time I should have been spending on other projects ... because I'm stupid and hopeful) hammering the thing into shape, making it look less like a comic book script and more like a screenplay.

At the time of writing this blog post, three of my novels are currently under option.   I'm grateful for this, but all of these projects are happening "way over there" and I don't really feel connected to them at all.  I'm keen to be hands on, so maybe Sally is my chance.  Maybe.  Who knows?

I hooked up with a like-minded fellow (I won't out him here in case he does not want to be thought of as stupid and hopeful) who liked the script and did a break down.  We've discussed casting and funding and all that.  It's all in the very early stages.  As a comic, we billed Sally as "B-movie" and "grindhouse" and I'd love to approach the film version the same way.  This could all end up being a stupid waste of time, but if I shunned everything difficult or unlikely, I'd never get anywhere.  I guess that's the point.  Hey, Gischler, you're wasting your time.  Yeah?  You might be right. I think I'm going to hit my head against this brick wall anyway.

In the meantime, Sally of the Wasteland still exists as a graphic novel.  Check it out HERE. 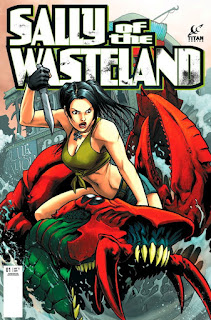 This is how I pay the bills.


So in order to pay the mortgage, I feel obligated to harass you fine people every now and then into spending some money.  I've been mostly pimping my fantasy trilogy recently since that's my latest thing, but just to mix it up, let's reach into the bag of forgotten stuff.

My first novel was Gun Monkeys, and it was nominated for an Edgar Award.  After being published by the fine folks at UglyTown, Bantam Dell picked up mass market and eBook rights.  I found out recently that the book has finally earned out after a 39 dollar check arrived in the mail.  BIG BUCKS.  So if you want to see the book that got me started, well, have a look maybe. 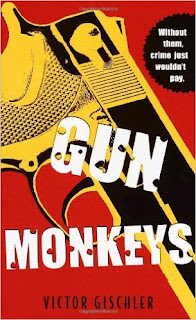