So after twenty seconds of careful thought, I've decided that 2009 marks the 10th year of my writing career. A question: When does such a career "start"? I mean, as a young man in high school, I wrote stories to amuse my friends. Hardly professional writing, but I knew even then I liked to write and that I would attempt to get serious about it in one form or another. What about my first cash sale? I remember how thrilled I was to get a check for the handsome sum of twenty-five dollars for a story about a family of mad scientists called "Conquering the Andersons" which appeared in a magazine called Alternate Hilarities. But it's hard for me to see that as the event which kicked off my career. My science-fiction, fantasy, horror stories weren't making regular inroads. Acceptance letters were few and far between.

So when did I hear the starting gun? Some history: In 1998 (or was it late 1997?), I was working hard toward my master's degree in English at the University of West Florida. In a graduate fiction workshop, I wrote a short story called "Hitting Rufus" which I sold to a small journal called Lynx Eye. I was pleased. At that time, I wanted anyone to publish me. I just wanted to get the work out there. But it was later, after the story had been published, that I got an e-mail that was ... well ... a surprise. I'd moved on to the University of Southern Mississippi to work on my Ph.D. when I got word the story "Hitting Rufus" had been selected for the 1999 edition of Otto Penzler's Best American Mystery Stories. The editor that year was the late, great Ed McBain. I mark that as the official starting point of my career because not only was I in a bigger profile publication than I'd ever appeared in before but the story's protagonist was Charlie Swift, the mob gunman who went on to star in my fist novel, the Edgar-nominated GUN MONKEYS. I had a direction now: Crime writer.

So what is this blog post about? I suppose it's half self-reflection and half state of the union address. I've come full circle now back to science fiction and fantasy. I hope everyone reading this has ten or twelve copies of Go-Go Girls of the Apocalypse and Vampire A Go-Go. Please remember that they make excellent birthday, Christmas and Arbor Day gifts. And yet my eager leap into these new genres in no way means I've given up crime writing. The cool folks at the shiny new Tyrus Books will publish my crime novel The Deputy in April of 2010. And since I'm keen on stories in all forms, I've been trying my hand at screenwriting and having a hell of a lot of fun with Punisher and Deadpool at Marvel Comics. Great writers like Lee Goldberg and Matthew Bright have worked (or are working) hard on excellent adaptations of my books. Lee's masterful adaptation of Gun Monkeys earned respect all over Hollywood, and we now have stylish director Ryuhei Kitamura attached to the project. I know once Matt's adaptation of G0-Go Girls begins making the rounds, people will be impressed too. And I have great faith in the talented young man currently humping it hard on the Shotgun Opera adaptation. More about that when the time is right. I'm hoping to dazzle you guys with some cool announcements very soon. So much happening!

So that's where I am and where I've been. Now to figure where I'm going.
Posted by Victor Gischler at 6:30 AM 8 comments: 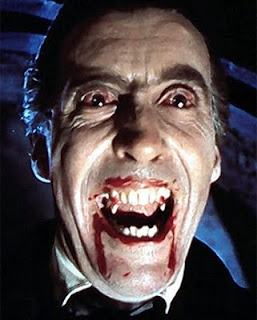 Folks, I'm getting one hell of a warm-n-fuzzy feeling. Thanks so much for all the messages telling me how much you're enjoying Vampire A Go-Go. My readers are the best. Obviously, the first couple of weeks after a book debuts can be a nervous time for an author. Will readers dig it? Will the reviews be kind? So thanks. Those of you who go the extra step to mention the book on your blog or elsewhere get a double helping of thanks.

(note: Christopher Lee is NOT in Vampire A Go-Go.)
Posted by Victor Gischler at 6:01 AM 12 comments:

So ... the wife and boy are off to see grandma and grandpa, leaving me to catch up on a lot of writing here at Club Gischler. But that doesn't mean I can't also enjoy myself. Upon completion of this blog post, I will be again erecting the man pavilion outside by the grill. Yes, much scripting this weekend will take place grillside. I am back from purchasing a ginormous rack of ribs and a steak the size of a whale's ass. I am well-stocked with appropriate libations.

Wish me luck.
Posted by Victor Gischler at 8:59 AM 4 comments: 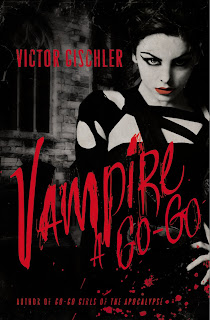 Folks, today is the official release date of VAMPIRE A GO-GO. A tale of the vampire, werewolf, sorceror, alchemist, zombie, witch, grad student variety. I hope you guys will all stom your local book store and buy up every copy there is. Seriously, for us non-James Patterson type authors, word-o-mouth is crucial to a book's success. So if you happen to read it, and happen to like it, I hope you'll take the time to talk it up. Thanks.
Posted by Victor Gischler at 6:58 PM 7 comments: