Anthony Neil Smith has written a kick-ass follow up to his novel Yellow Medicine and it's called Hogdoggin'. In support o that, he's whipped up a virtual motorcycle rally. Cath up with the action below as guest-blogger Neil brings you up to speed. Pay attention or I'll smack you in the mouth. I'm Neil Diamond!

In the Last Episode, Jedidiah Ayres spit in your soup at Hardboiled Wonderland.

It had been a strange few days for Steel God--the attempt on his private parts, the run-in with that strange guy at the Bibliothecary, and now being haunted by Emerson LaSalle. Or was it the pills and booze?

Even now, LaSalle’s plug of his bio-pic Pulp Boy--co-written by Anthony Neil Smith and Victor Gischler, being developed by Jake Dickey of Explosive Entertainment--echoed in his head like those song lyrics you just can’t remember, or like the final piece of a jigsaw puzzle that vanished before you even opened the box.

Why would one of his heroes dis him like that? Especially if it was a figment of his own drug-addled, sleep-deprived imagination?

But Steel God was still sharp enough to realize he was being followed. Had been since the cemetery. It wasn’t a “blend in” sort of car. A convertible BMW. Whoever it was had been keeping about a half-mile back, obvious but not aggressive. He’d already figured out it wasn’t law--only one guy. That left jealous husbands (easy enough), vigilantes (easier), or one of the big fish from the drug trade (those were tough).

The follower would speed up when Steel God sped up, slow when he slowed. It took a truck stop outside of Sioux Falls to finally bring the guy out of the shadows.

Steel God went inside to grab some coffee and a slice of pie. It wasn’t ten minutes later when a disheveled man slid onto the stool beside him. Salt-and-pepper hair, usually very-well styled, sort of a hungover mess. Aviator shades, five o’clock shadow. Smelled like he’d worn the same clothes a week.

“Just a Sprite,” he told the waitress, stinking of bourbon.

Steel God just glanced at him, didn’t say a word.

Then the man asked, “What did he tell you?”

“LaSalle. Wh-what did he have to say?”

Steel God’s blood chilled in spite of the scalding black coffee. “The fuck are you talking about? Dude’s dead.”

“Then who were you talking to? What set you off?”

He’d been there watching the whole time. Waited out the blackout. And…he knew.

Ticked a grin, then nothing. He said, “I was rich. I was successful. I did it all in spite of LaSalle. But in the end, we became friends.”

“He was supposed to tell me the secret. He’d been working up to it, the secret of his prolificacy.” His voice cracked, and he lifted his fist, shook it at the sky. “But then that bear! That goddamned bear!”

Steel God took a bite of pie. It was nice pie. Chocolate.

“He did it on purpose. Let that bear get him. To foil me, I tell you. He had to have the last laugh over Stone Q. Mann.”

He glanced over. Steel God waited.

Mann said, “Ever heard of me?”

“They made movies of my books.”

Steel God pulled a five from his pocket, laid it on the bar, and started to go. If this Mann fellow wasn’t hooked into the drug trade, then he was just some loon. Better ignore him.

Mann grabbed Steel God’s shoulder. “Wait. I can show you more. I can give you what it is you’re searching for.”

Any other man would’ve grabbed God that way, he’d have lost use of his arm. Immediately. But something about sad-sack Stone Q. Mann made him pause and give the guy a chance.

On their way out to the parking lot, Mann filled in some holes. “I met LaSalle at my first sci-fi convention when I was sixteen, seventeen, something like that. He was a hero! So I hoped he would read one of my stories. But when I approached him in the bar, he humiliated me. Handed my ass to me. So I vowed to top his success. And I did! I was the best-selling speculative novelist of the nineties.”

By then, they were at the trunk of Mann’s car. He opened it to reveal several boxes full of LaSalle’s books. Next to them was an electronic contraption that looked like something Q would give to Bond.

Mann went on, “When we buried the ax, I began learning so much more. I felt free as a writer, no longer tied to science or reason.” He spat those words like they were poison. “I mean, my sales plummeted, and I was handed off to smaller and smaller presses until, well…maybe they didn’t sell, but I was writing the best shit of my entire career! And just when I came to the point where LaSalle was ready to give me the final answer--”

“Yes! Croaked indeed. But I knew that his physical form could be transcended. I’ve been waiting for his ghost to return from the great beyond and deliver the final puzzle piece.”

“So, please, Mr. Biker, sir. What did LaSalle have to say to you? What as it I’ve been waiting for?”

“You knew him better than I ever did. He called me a fool.”

Just then, a Toyota Prius pulled up alongside Mann’s BMW. Then another on the other side. And then another roaming the edges of the parking lot. Inside all of them were men in Roman collars and dark sunglasses.

Mann looked panicked. “They found me. Oh shit. I’ve said too much. You need to get out of here.”

“No, you down notch it, sir! These men…they are stone cold killers.”

“Exactly. You’d better hurry.” Mann shoved a box of books into Steel God’s arms, slammed the trunk and hopped in his car. He spun out of the parking lot, followed by all three of the Priuses.

Steel God stood watching a few minutes…then dropped the box of books, mounted his bike, and throttled up.

But before he left, he reached in and grabbed a couple of LaSalles--Sheriff Dracula and Death Throes of the Serpentine Queen. Why the hell not? It got dull on the road sometimes, even for a biker badass like himself.

What haven’t I said about Victor Gischler on these pages? You know I went to grad school with the guy, and he was there in the beginning of Plots with Guns. We read each others’ first drafts. We try to hit a few cities together for tours, conferences or just a round of golf along with our buddy Sean Doolittle whenever we can.

Plus, he’s a “genre chameleon”, able to slip into and out of sc-fi, crime, fantasy, superheroes, and literary fiction without skipping a step--it’s about telling a good story, and whatever instrument helps tell that story, that’s the one he’ll play.

Then there’s Emerson LaSalle, Gischler’s pseudonym/alter ego, designed as a way to revel in the glories of a type of sci-fi we don’t see much anymore: cheap, indulgent, and full of imagination, thus the LaSalle Principal: “Technology ruined science fiction.

A typical LaSalle novel would theoretically blend a sci-fi landscape with a Western or Crime plot, dotted with bad science (even for its time!) and flagrantly sexist depictions of giant-breasted alien women. Plus, he would rail against Nazis and animals a lot. And supposedly, he wrote over 400 of them.

When we talk LaSalle, we’re talking about the tendency to let logic fly in favor of ol’ fashioned shoot ‘em up, Cinemascope, Technicolor wonder. It’s like a spice you add to a work that might not be quite doing it for you on the page while you write.

You can find some LaSalle leanings in Gischler’s Go Go Girls of the Apocalypse, and even more so in his forthcoming Vampire A Go Go--featuring alchemists, vampires, werewolves, crack squads of battle priests, and ancient treasure. And I’ve heard his plans for even more actually using the nom de plume.

But let’s get to the heart of it all: Gischler is a true pulp hero. He writes fast, he writes smart, and every book or story is going to grab you by the balls. In an age when it feels like we’ve lost the thrill of grabbing a cheap paperback off the newsstand and leaving it behind on the bus for others to read, the story spreading like wildfire, Gischler gives us that again every time out of the gate.

And man, he got to write a Wolverine! How fucking cool is that? Keep up the good work, buddy.

Another thing we’ve got in common--one of the best damned publishers in the country: Bleak House Books. Hogdoggin’ is hitting stores now (Buy it on June 1st, please! Hogdoggin’ Monday!), and The Deputy will be following right behind in August. It’s a great fucking book. Mine’s a road romp through the raw and rough Minnesota prairies, and his is a dusty scorpion-bite noir set in Oklahoma. Both well worth your time.

On the Main Stage: William Shatner, “Common People”
Posted by Victor Gischler at 6:52 AM 1 comment:

wow. dullsville around Blogpocalypse these days. Why don't I post more? Hmmmm. I must suck. Yeah. That's almost certainly the answer. Although, I have been working rather hard on multiple projects at once. Comic books. Novels. Screenplays. I'll be a household name any day now. A very strange household in Madagascar. Full of drunk insane people. That sort of household.
Posted by Victor Gischler at 3:26 PM 6 comments: 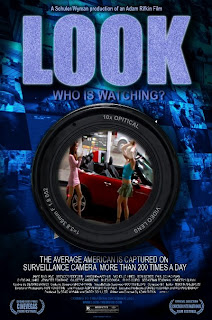 Saw a great film yesterday called LOOK. This gem did incredibly well at the festivals and is just now available on DVD. It's directed by Adam Rifkin and one of the producers is Brad Wyman, the cool cat responsible for Monster and also the guy currently trying to organize the Go-Go Girls of the Apocalypse film. When I was out to L.A. for the book festival and visiting with Brad, I expressed my interest in Look, and he generously slipped a DVD into my hands. Nice guy!

At first, Look would seem to be a voyeur's dream. The film begins with the audience spying on some very attractive teenage girls in a mall dressing room. We get to see just about everything. We also follow a department store manager's sexual exploits as he takes multiple female employees into the back room for ... well, you know.

But just when the film has comfortably seduced us with it's voyeuristic yumminess, things turn dark. The cameras record various characters making some very bad decisions as we take a left turn into noir territory. Some of these criss-crossing stories become quite chilling.

If you're looking for something a bit different, I suggest you give Look a try.
Posted by Victor Gischler at 6:39 AM 5 comments: 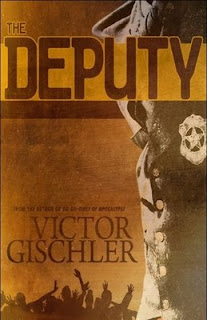 This just in. the new groovy cover for my forthcoming crime novel THE DEPUTY.
Kudos to designer Kristie Langone.
Posted by Victor Gischler at 8:20 AM 11 comments:

Check out the new kids on the bock : New Pulp Press.

They look fun and word on the street is that they're open to submissions.
Posted by Victor Gischler at 9:35 AM 2 comments: