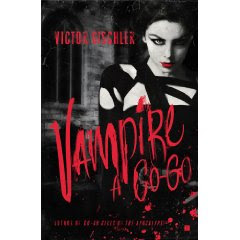 Publisher's Weekly on THE DEPUTY

The Deputy Victor Gischler. Bleak House (http://www.bleakhousebooks.com/), $24.95 (256p) ISBN 978-1-60648-046-5; $14.95 paper ISBN 978-1-60648-047-2
At the start of this solid noir from Gischler (Suicide Squeeze), the police chief of Coyote Crossing, Okla., asks Toby Sawyer, a part-time deputy, to keep an eye on the bullet-ridden body of redneck Luke Jordan, found late one night lying half-in and half-out of an old pickup truck. Since a 17-year-old girl Toby's fond of lives nearby, he can't resist the temptation to take a break from his vigil. On returning to the truck and discovering the corpse gone, Toby fears his dereliction of duty will end his job with the sheriff's office. In the course of his desperate search for the cadaver, Toby encounters a truckload of illegal Mexican aliens as well as corrupt colleagues. Meanwhile, as the body count rises, Toby's wife, with whom he has a loveless marriage, leaves town. The ending may be a bit upbeat for true noir devotees, but it leaves the door open for a sequel, which would be a welcome prospect, given Toby's appeal as a protagonist.
-- Publisher's Weekly

Posted by Victor Gischler at 3:29 AM 4 comments:

http://www.newsarama.com/comics/060909-Punisher-Gischler.html
Posted by Victor Gischler at 11:34 AM 4 comments: