Thanks for the support, ye mighty readers!  The trend of the feedback has been very positive so far! 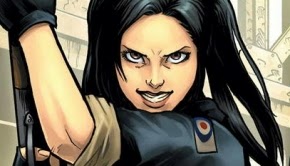 What folks are saying ...

"Gischler makes sure every page, panel and dialogue is over the top, fun and filled with odd one-liners and enough graphic gratification to keep you on the edge of the seat, stunningly supported by the visuals of Tazio Bettin." -- Comics for Sinners

"Just from the second issue alone, I thoroughly enjoyed Sally of the Wasteland. No, not enjoyed; loved!"  -- FangirlNation

"Sally Of The Wasteland is not a subtle comic.  Then again, Sally is not a subtle person.  One does not expect subtlety with a heroine who owns a shotgun named Bertha.  But while Sally may not be subtle, she is one of the more memorable female protagonists to star in a comic in some time.  She is a lost sister to Tank Girl and Cassie Hack, whose personality bounces between “Annoyed” and “Psychotic” even when she’s trying to be flirtatious. 4/5" --  Kabooooom

"It is however the action sequences that [Bettin] excels in the most, with the brutal panels being both beautiful and gory, taking the series to the level of intensity it needs to be at. Bettin also produces his own colours with his striking palette giving a very rich tone to the series." -- Unleash the Fanboy

And just for fun (and to show how fair minded I am) here's a dude that really really hated Sally all together: Click.
Posted by Victor Gischler at 5:39 AM No comments: