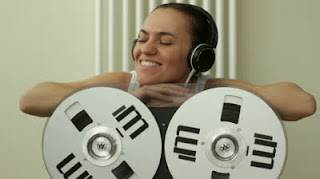 Are you a fan of audio books?  Now you can click HERE to check out my novels in audio format on Amazon.  If you sign up for a free 30-day trial of Audible, you can even listen for FREEEEEEE.
Posted by Victor Gischler at 5:26 AM No comments: 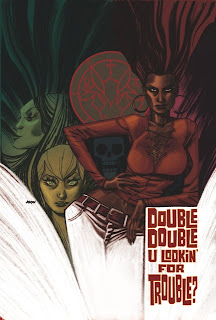 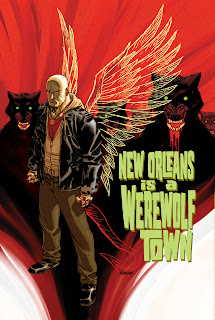 Interview HERE.
Posted by Victor Gischler at 3:59 PM No comments:

Where will I be FREE COMIC BOOK DAY? 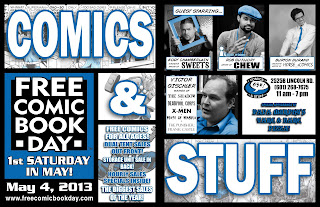 
Hattiesburg, Mississippi!
Posted by Victor Gischler at 6:41 AM No comments:

Just had a sudden strong craving ... 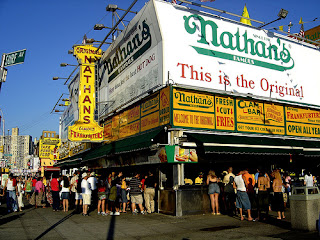 Maybe this will be the extra motivation I need to finally make it to New York Comic Con.
Posted by Victor Gischler at 12:19 PM 2 comments: 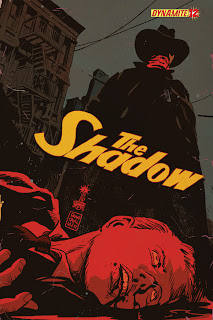 Bring your cash money to your local comic shop, or get it digital style RIGHT HERE.

Posted by Victor Gischler at 4:45 AM No comments:

Recognize those two guys in the middle?

Recently the above photo was released during a Buffy twitter chat, so I guess it's cool to share now.  At the Dark Horse Season 10 writers summit all the writers were privileged to have the participation of Joss Whedon and Nicholas Brendon.  I was very lucky to be part of this great think tank.  Coolness. 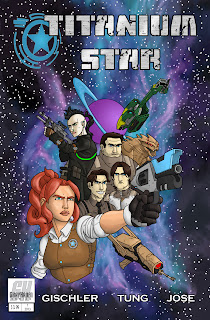 A new space western written by me with art by Sam Tung and published by GrayHaven Comics.  Coming soon to a comic store near you ... uh ... if you tell them to order it.  So please do.  (Please?) 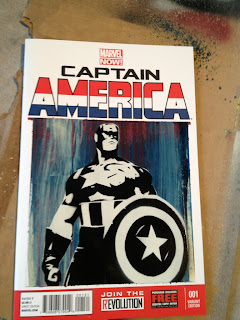 Well, I had a great time at the comic book show in Dallas.

I espcially want to thank Jason Adams a really cool artist who gave me a picture of Mordecai from The Regular Show to give to my son.  Very cool and generous.

Jason works with spray paint.  You heard me.  Run of the mill hardware store spray paint.  But he can do some awesome stuff with it.

Posted by Victor Gischler at 7:50 AM 4 comments:

So I'm having one of those times when a bunch of stuff is just hanging out there.  Things that theoretically should click into place any minute but ... well ... haven't yet.  So, I offer some bullet points which are mostly useless:

* Film stuff.  This has been a crazy roller coaster.  One deal that looked like it was about to click went belly up.  But two "dead" projects have suddenly found a pulse again.  Yet another is hovering in the wait-n-see zone.  I don't know what to think about you, film industry.

* THE SHADOW.  I have a real appreciation for Dynamite Comics who were cool enough to turn me loose on The Shadow.  Great pulp fun.  A joy to write.  #11 comes out today and wraps up the "Revolutionary" arc.   If you've been thinking of giving The Shadow a try (and I hope you do) but don't want to stumble into the middle of a story, then I suggest you ask your local comic shop to reserve you an issue of #12 which is a self-contained one off.  Then if you like it, you can always go back and get the rest.

* Other COMIC BOOK stuff.  I am just itching to spill the beans on some creator-owned stuff.  Two very cool projects under contract.  Contract expected soon on a third.  I don't want to be this mysterious.  I'd rathing be blabbing.

* Fantasy novel progressing nicely. I've been gearing up for this one a long time, so it's really going fast now that I'm actually writing it.  GO-GO sequel is coming along too ... although there are stops and starts because of other projects.

* I'll be HERE on April 13.  Come get your funny books signed if you live in or near Dallas. 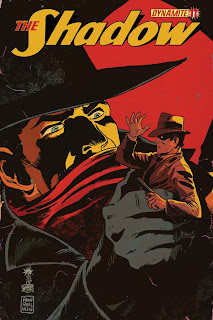 Bring money.
Posted by Victor Gischler at 5:39 AM No comments:

Comixology has my run of X-Men for sale at a measly 99 pennies per issue.  Go get some.
Posted by Victor Gischler at 5:34 AM No comments: