Come see me next month at Nola Comic Con in April!

I talk crap in an interview HERE.

Get your latest dose of Prelude to Deadpool Corps on sale today!

Have you punished yourself lately? Remember that THIS is still for sale. Makes a great gift for the demented in your life.

Still thrilled about THIS FILM NEWS. 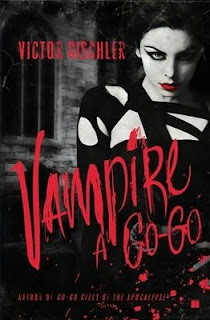 Posted by Victor Gischler at 4:20 PM No comments:

The Line-Up #3, poetry you should check out

Gerald So was kind enough to fix me up with with a .pdf copy of THE LINEUP #3 and I have to say I'm impressed. In my opinion, most of the poetry written in the world is utter garbage. When you pick up a Norton Anthology of literature and read some of the classic poems within, you have to understand that each of those gems represents thousands of discarded turds that poets have penned over the centuries. So when I open the pages of The Lineup #3 and see that 75% of the poems within are actually good, I have to say I'm pleasantly surprised. You beat the odds, guys. Congratulations.

Not all the poems hit the mark, and without bothering to name names, I'll simply say that some selections suffer from that age old poetry problem -- prose with line breaks. Taking run-of-the mill sentences and giving them neat little line breaks so you have a narrow column of words skipping down the page does not a poem make. Hey, I'm guilty of this myself. One time, I took a crime "poem" I'd written and took out the line breaks and sold it to Crimestalker Casebook as a short-short piece of fiction. It happens.

But many more of the poems are quite enjoyable. I suppose I could go poem by poem and point out some nice use of language and some vivid imagery I think works pretty well ... but I'm a lazy lazy man. Trust me. It's in there, and you should take a look for yourself. I will say that the James Sallis and James W. Hall poems were among the most memorable. Many of the selections are expertly rendered, yet simultaneously accessible to the reader that might not normally make a habit of reading poetry. Try it.
Posted by Victor Gischler at 6:30 AM 3 comments:

Countdown to THE DEPUTY continues to count down! 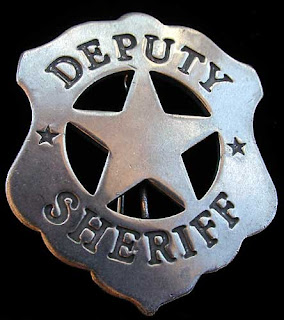 Remember, boys and girls. Official realse date of The Deputy (give or take few days) is April 1. Buy them books, people. Feed my family. To entice you, I've listed ten random facts about The Deputy.

1. The novel features two muscle cars, one of which is a Mustang Mach 1. Vrrrooom.
2. In a surprise move, Gischler has included sex and violence in the novel.
3. No one will be seated during the exciting Semi-truck crashing scene.
4. It is set in Oklahoma. Very very rural Oklahoma.
5. Shotguns? Yes.
6. Abba is mentioned!
7. A motorcycle!
8. Coffee and energy drinks!
9. Cell phones don't work so far out in BFE!
10. Tie her up with a lamp cord.

There. I hope you're intrigued. See you at the book store.
Posted by Victor Gischler at 6:05 AM 4 comments:

Support an author and a publisher! 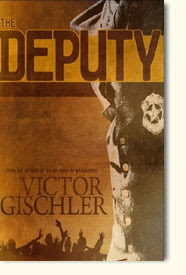 THE DEPUTY hits officially April 1. No, this is not an April Fool's Day joke. It's really the first crime novel I've published in FOUR YEARS! I mean sure I've been go-going hard with vampires and the fall of civilization, but now I'm coming back to crime fiction and I need your help. How can you help? Well, obviously you can buy a copy or two or ten. If you've read my work before then welcome back. If you've never read a single word written by me, well, maybe this is a good opportunity to try me and see what all the fuss is about. If you're one of the cool types who've been reading my work with Marvel Comics, then this is your chance to see if I can hold your attention without a groovy artist backing me up.

And it's also you're chance to support a hip, new Independent publisher -- TYRUS BOOKS!
You can order copies of The Deputy directly from them, or you can aso support your favorite book store. It's all good!
Hey, we all know I don't have the name recognition of ... say ... J.K. Rowling. It's super important for authors like me to get good word of mouth. So please give The Deputy a try, and, if you happen to dig it, blog it, tweet it, tell somebody.
Thanks!
Posted by Victor Gischler at 8:59 AM 5 comments: 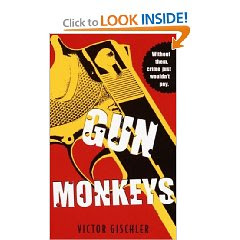 Thanks, Daniel, for your thoughtful words on GUN MONKEYS.
Posted by Victor Gischler at 7:51 AM 11 comments: 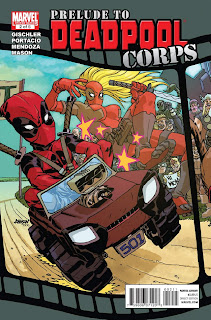 Bring money.
Posted by Victor Gischler at 9:26 AM 1 comment:

Behold: THE PISTOL POETS in Italy 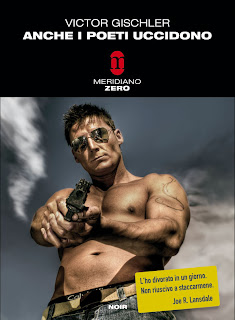 Thanks, Meridiano Zero!
Posted by Victor Gischler at 6:40 AM 8 comments: