KICKSTART MY HEART: A GO-GO GIRLS OF THE APOCALYPSE SEQUEL 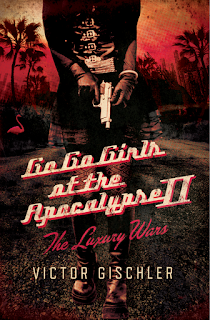 Go-Go Girls of the Apocalypse II: The Luxury Wars is the title of the sequel to the original Go-Go published in 2008 by Simon & Schuster.  The only catch is ... I haven't written it yet.  Then why are you bothering us, Gischler?!?!    An explanation:

Soon after the Touchstone imprint of Simon & Schuster published Go-Go-Girls of the Apocalypse, I started getting requests from kind readers for a sequel.  I generally don't write sequels, but the requests just kept coming in.  Also ... I actually had an idea for a sequel which doesn't usually happen.  I eagerly pitched the idea to my publisher.

They shot me down.  "Sequels don't sell" they told me.  And when Go-Go wasn't an immediate best-seller they seemed to lose interest all together.  Conventional wisdom dictates that a different publisher won't mess with a sequel if they don't have the rights to the first book.  So writing a sequel simply wasn't in the cards.  But then the book was lucky enough to get a 2nd printing, and a 3rd, and a 4th.  It was optioned for film.  Translation rights sold.  And while the book still never got those J.K. Rowling numbers that all publishers hope for, the requests for a sequel still hit me on email and found me on Twitter, etc.  But alas, there was no home for such a sequel. (Single tear rolls down cheek.)

Two things have made me change my mind:  1. Kickstarter and 2. Kindle (and other e-readers.)

I can now skip the middle man and offer the sequel directly to readers, and Kickstarter affords me the opportunity to really test if there is a desire for a sequel at all. And although readers of the first book are the most obvious targets for a sequel, my plan is to write a novel which won't lose new readers.  The story is right there in my brain ready to go.  I just need to get my ass in the chair and start typing.

So here I am humbly asking you to do one (or both!) of two things.  1. Click HERE to support my kickstarter campaign. That tingle you feel is me zapping you with white hot karma.  2. Spread the word on your blog-o-thingy, Facebook or whatever.

Free Hardboiled Fiction for your KINDLE 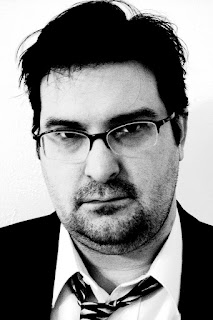 Okay, guys, my good pal Anthony Neil Smith is giving it away free today.  Check out some of these great free hardboiled novels for your kindle.  One is even co-written by me.

Today only!
Posted by Victor Gischler at 6:41 AM No comments:

Gischler fiction can get you laid! 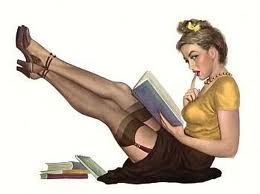 Recently, I gave a short story away on my blog and the result was the following email from a UK reader:

Hello Victor
Could I have the free pdf of your short story, please?
Glad I found the link to this on Twitter. I bought Shotgun Opera in paperback over here in England a few years back and absolutely loved it.
And here's a story: I got chatting to a foxy chick in a coffee shop about books with great female characters. She wasn't enjoying the book she was reading and so I recommended Shotgun Opera, which I had just finished, and lent her my copy. A week later, she contacted me to return it (she loved the female assassin family) and we ended up spending a pretty fun weekend together.
So from now on, I think all your book covers should include the legend "This man's writing will get you laid"
All the best, keep up the great work.


Never have I so accurately hit my target demographic.

Thanks, Steve!
Posted by Victor Gischler at 11:02 AM 3 comments: 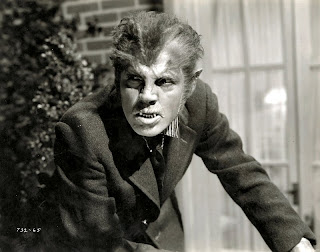 Okay, I write for a living, so once in a while I feel obligated to sell you some junk.

If you have a kindle click here to check out Three on a Light, a collection of linked short stories about a shamus who takes cases involving werewolves, vampires and other things that go bump in the night.  Proceeds go to a worthy cause.  (My next vacation to Disney.)
Posted by Victor Gischler at 6:44 AM No comments: 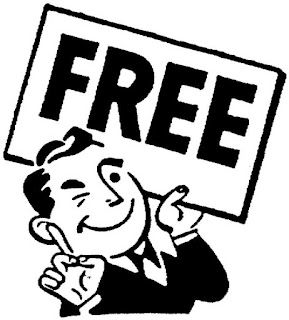 Back when the much-missed David Thompson was alive and running Busted Flush Press, he was cool enough to invite me to write a story for an anthology of "geezer noir" called Damn Near Dead.  Later, as a promotional tool (and just to be nice honestly) he provided me with a .pdf of my short story to give away for free.  Recently a Blogpocalypse reader reminded me of this story, and I thought it a good idea to offer it again.  For free.  No strings attached.  So if you'd like a copy of the story as a .pdf attachment, simply zap me an email: victor.gischler ["at" symbol] gmail.com.

Thanks again, David.  We miss you.

Posted by Victor Gischler at 6:55 AM 2 comments:

Excuse me, but we were right in the middle of a movie... 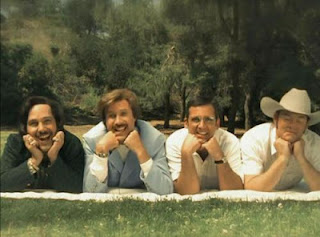 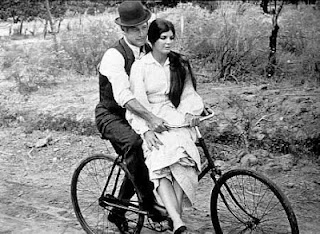 You know what I enjoy?  When we are smack dab in the middle of a film and suddenly, often seemingly for no reason, there is a song.  I like things that are arbitrary if done well ... a tough combination.  So below, in reverse order, are the top three songs that come out of nowhere in the middle of a movie.

3. "Raindrops Keep falling on My Head."  This makes the bottom of the list as it was not actually sung by the characters in the movie.  But it sure does come out of nowhere.  I mean, it's a western, right?  Can you imagine a sudden musical number in Unforgiven?  Try to picture John Wayne suddenly singing a song in The Searchers.  I have to think that on paper this looks like a bad bet, but it's a great scene from Butch Cassidy and the Sundance Kid.

2. "Afternoon Delight" from Anchorman.  A great silly scene for a wonderfully silly movie.  Executed perfectly, the characters all fall right into the song as if it is the most natural thing in the world.  Quality funny.

1. The #1 song on the list is not the best song, and not the most well executed.  It makes the top of the list for the simple reason that it provides a surprisingly amusing moment in an otherwise tedious film.  You can experience it HERE.


Okay, that's an intentionally half-assed list I thought up in about four minutes.  Let me know what I missed.  Links appreciated.
Posted by Victor Gischler at 5:05 AM 6 comments: 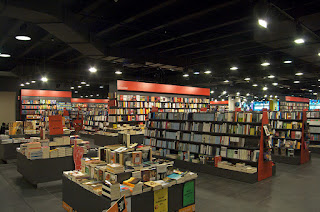 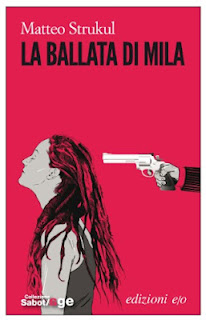 A chain of book stores owned and operated by the Lovat family provided two stops on our tour.  Al Guthrie and I signed books at their Trieste and Villorba locations.  Not only did they provide excellent hospitality in their wonderful book stores (see picture above) but they invited us into their home for lots and lots and lots of food and wine.  I was made to feel very welcome and moved by how gracious these nice folks were.  They served a traditional local dish consisting of hard boiled eggs and white asparagus the size of elephant tusks.  You mash the eggs and sprinkle with balsamic vinegar.  Good stuff.

I should now pause to thank my Revolver editor Matteo Strukul.  Not only is he responsible for much of my success in Italy, but he's a hell of an author in his own right.  A great guy and a talented writer and my pal. 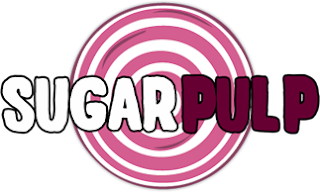 Okay, I've been remiss about sharing highlights from my recent trip to Italy.  I will never be able to do it justice, but I at least want to bullet point a few things.  First, many thanks to my publisher Edizioni BD and their Revolver imprint.  They arranged for me to hit the Turin Book Fair and make a bunch of other stops with fellow crime scribe Allan Guthrie.   Al and I spent a lot of time in the back seat of our editor's car with a couple of boxes of books between us as we went ripping around Northern Italy to various events.

What I love about Italy is that they are very creative with their events.  Yes, they have good in-the-bookstore style events, but we also got to do events in restaurants which is the best idea ever because we get to drink wine and eat amazing food while meeting readers and talking about books.  The Corte Dei Leoni in Padova hosted one such event and it was a bit like coming home since I took most of my meals their on my last trip to Italy to attend the Sugar Pulp Festival.

Every single day was a new adventure.  Watch out for the Grappa.