Another one of those end of the year posts.

So. 2014.  There were times I really felt like the year was dragging along.  But now that we're at the end, I sort of wonder where the year went.  I have lots to write.  So many deadlines.


But I honestly can't say I have any special insight about wrapping up another year.  I did accidentally say New Year's Revolution to my wife instead of Resolution, and I sort of liked the way it sounded.


And ... well ... no, I actually don't really know what that means, not exactly.  Just that there are a few things I'd like to do differently.  For one thing, I am HUGELY grateful for any and all work-for-hire comic book gigs that come my way.  Making a living as a writer can be tough, and it's not something I take for granted.  Having said that, I think I would like to shift my focus slightly to more creator-owned things.  Sally of the Wasteland wrapped recently, and I miss scripting characters of my own invention.  I love working with artists to create something new.


I'm also keen to be more proactive about getting my books and comics to film, and I'm actually working with some people now to make that happen.  More on that if/when it comes together.


So, yeah, more proactive .... but more selective too.  I want to zero in on fewer projects but really put all of my best efforts into them.


For a while novels took a back seat while I cranked out the comics.  I'm very glad to be back in the novel writing business, and I want to keep fanning those flames.  Fantasy and science fiction are big in my life right now, but I haven't given up crime writing.  Check it out here.


So ... nothing really so revolutionary after all.  These are all things any number of writers might say, right?


I feel there is something hovering just on the edge of my perception, just hanging out there.  The big WOW thing. I need to be vigilant.  I need to be ready to grab in case the WOW thing comes within reach.

Coming soon to explode your face! 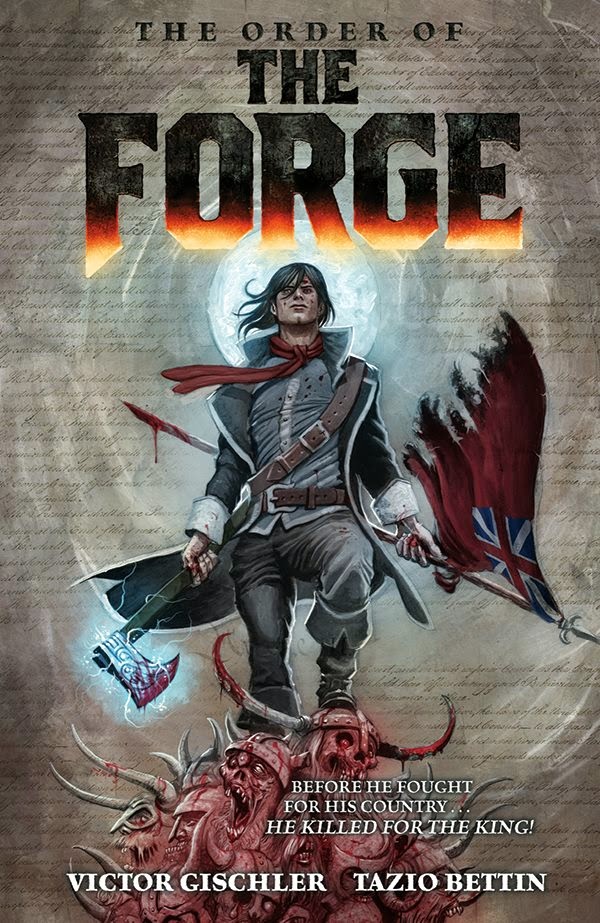 (Click to embiggen.)
Posted by Victor Gischler at 6:11 AM No comments: 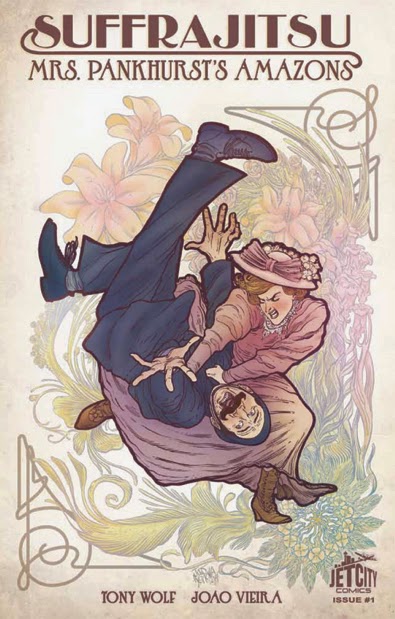 I don't really do "reviews" on this blog, but I do occasionally make mention of somethign if it catches my eye, and that's the case here with Suffrajitsu.

Tony Wolf has hit on something interesting here. There might be another comic out there that takes on the suffragette movement in 1914, but if so I don't know anything about it. These women are not prim and proper.  They are kick ass.

Joao Vieira's art seems a perfect match for the subject matter.  It really has that old-timey vibe that takes a reader straight back to 1914.

Jet City is a relative newcomer to the comics industry, but with the might of Amazon.com behind them, I've been curious to see what they can do, and Suffrajitsu is a good introduction to the publisher.  Wolf especially does a good job leaving us with an intriguing cliffhanger that spurs us to get issue #2.  I'll be keeping an eye on Jet City and this title.
Posted by Victor Gischler at 5:19 AM No comments:

SALLY OF THE WASTELAND hardcover!

Issue number five of SALLY OF THE WASTELAND brings our exciting and irreverent post-apocalyptic tale to a close (for now). 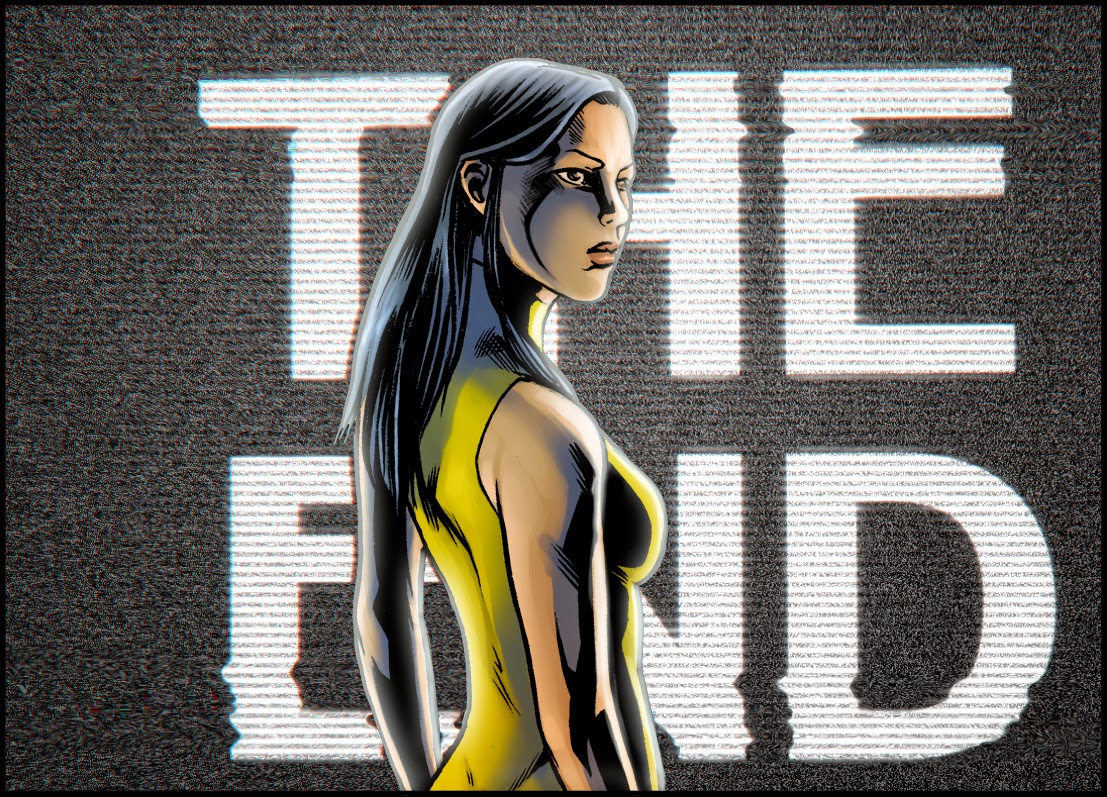 But with endings come new beginnings!  (And new sales pitches!)

All five issues of SALLY OF THE WASTELAND have been collected into a handsome hardcover with a nice chunk of bonus material.  The book will be available in a few months, and as always, I encourage you to pre-order at your favorite local comic shop.

But, hey, this is the internet, so here's a link right HERE if you'd rather order online.

Working with artist Tazio Bettin and Titan Comics was a hugely rewarding experience, and I'm proud of this crazy, B-movie comic.

So ... throw lots of money at the hardcover.  Thanks!


Some stuff people said and junk:


"This comic pays a perfectly honed homage to the days when there was little distinction between sex and violence. And it does it with a kick." -- Bloody Disgusting


"To say that the art is amazing is an understatement. " -- Comic Bastards


"Sally is a character you’ll either love or hate.  She’s like Harley Quinn and Deadpool – sassy and full of chaotic impulses.  She skirts the line between being a full-on cartoon character vs. someone who has adopted a care-free outlook on life to avoid internalizing the horror of the outside world.  Mostly she’s just fun.  If you enjoy either of those series and want to give something new a shot, I highly recommend this book." -- Rhymes with Geek


"Long story short, this (in my opinion), is a fantastic "Testosterone" comic. Not too heavy handed on the story, plenty of action and nothing offends my artistic eye. So go ahead, crack open an ice cold beer and have a read." -- Comic Crusaders
Posted by Victor Gischler at 7:22 AM 4 comments:

INK MAGE is a December monthly deal for your Kindle!

I thought that the Kindle version of Ink Mage had been put on sale for Cyber Monday, but my publisher informs me that the novel is actually a kindle monthly deal.  This means they've knocked a couple bucks off the price.  So if you've been waiting to pull the trigger on this novel, then now is the time.  Or -- since this is the season of giving after all -- maybe it's a good gift choice for the fantasy lover and/or Kindle user in your life.


Ink Mage is the first book in the A Fire Beneath the Skin trilogy.  I'm grinding hard on the sequel now.  (Deadline!)  But, hey ... the sequel won't make quite as much sense unless you read the first book.  So come on!  Make with the click click.

Posted by Victor Gischler at 6:15 AM 3 comments: