Legends of the Smith Corona #00 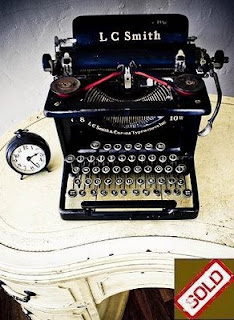 "In 1950, I wrote an epic space opera called To Swallow the Sun in eleven hours. The book was 600,000 words long. To be fair, I passed off a number of short chapters as 'cloud person' talk which basically consisted of random groupings of the letter F. So a typical cloud person conversation might go like this:

And so on. It was a pretty damn long novel, so I would often take chapters from the beginning and copy them over again at the end. Nobody seemed to notice. The last three hours I snorted lines of Ovaltine to keep awake. I could not afford milk then and lived mostly on army surplus k rations and Brill Cream."

-- Emerson LaSalle in an interview with Hugh Downs, 1970.

Posted by Victor Gischler at 5:44 PM

This LaSalle fella reminds me of one Bill Brasky.

You should talk to Dennis McMillan, rumor has it he's in possession of a blood-and-cumstained xerox of the original typescript. Those "fff's" are actually not as unreadable as you might expect, certainly better than some of the early chapters. The typescript showed up one morning on his doorstep along with the mummified corpse of an alpaca.

Bill Brasky is one ten-foot tall son of bitch. I once saw him eat a buffalo.

Crap, how did I miss this one?

I heard there was video of this interview up on YouTube for about ten minutes last flag day before it was removed at Hugh Downs's insistence. Wish I'd caught it. I've always wondered whose version of how that interview ended is true.

I... can't... believe it. The illusion has been completely shattered for me... I spent hundreds of hours decoding the "royal glorified dialect of the grand cloud empire" with my school buddies as a teenager--only to find out now that it was simply random groupings... I was sure there was some secret hidden in the text. I still have all my research in dozens of notebooks packed away in a backpack in a closet at my grandma's house.

I'm... I dunno. I don't know what to believe anymore. Everything I knew is wrong. I could have sworn that I almost had it decoded... so many patterns discovered... I could have sword I could almost understand what the cloud people were saying. I wrote to LaSalle on a monthly basis in the mid nineties to show him the progress I had made. He never wrote me back personally, but I still have several of the "Cease and Desist" letters sent by one of his ex-wives.

didn't Lasalle eventually succumb to his Ovaltine addiction, or at the very least switch to Strawberry Nestle Quik?