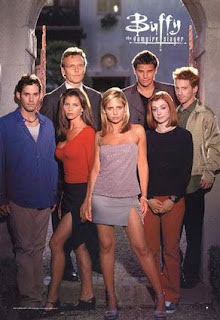 Earlier in August I blogged that I would be watching every episode of every season of Buffy the Vampire Slayer all in a row. This was part of the moral support I was offering my wife Jackie who is watching all the episodes as part of an effort to write a smartish academic type paper about the show.
So my TV watching the last 2 weeks has consisted almost exclusively of Buffy, pausing only now and then to catch some news or a bit of football. (Go Gators!)
And I think I'm going a bit crazy. I'm starting to think of the characters as people I know. My dreams are lousy with Buffy, Spike, Xander and Willow.
Today I'm going to watch some golf on TV which I hope will act as mental sorbet.

Posted by Victor Gischler at 5:35 AM

There might be some evil vampire monkeys who live in the sand traps, reayd to punce on anyone who three putts.

Listen to me, you can't do more than two or three episodes a day, I hope you realize that. Your brain just can't handle that kind of exposure to Buffyverse. My husband and I found that out when we tried to do a Buffy marathon one Christmas day-our vision blurred, our brains actually started to hurt.

Have you started watching Angel yet?

After digesting the entire Buffyverse in such a manner, I think I'm going to need a good, long rest before I try Angel.