I want to sell you a book ... and also this other book. 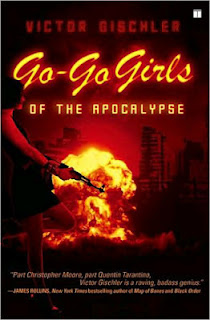 Hello, Blogpocalypse readers!  If you've seen the previous blog post below, then you know I launched a Kickstarter campaign to test interest for a GO-GO GIRLS OF THE APOCALYPSE sequel.  Although we had 45 days to reach our modest goal, the project was funded in less than four!  I am overwhelmed by the enthusiasm and generosity.  It seems traditional that when a Kickstarter project reaches its goal quickly that a new "stretch" goal is then offered, and I've done just that.  If you click HERE you can find out how to back this project and receive Go-Go Girls of the Apocalypse II: The Luxury Wars AND also get a third Go-Go book *if* we reach our new funding goal.

But while I do plan to write a sequel that will be totally accessible to new readers, I would guess that the most likely readers are those who read the first Go-Go novel.  So I propose the following: With 36 days left on the Kickstarter campaign, that's still PLENTY of time to order the original Go-Go-Girls of the Apocalypse, read it, and decide if you want to jump on the sequel band wagon.  If you've been on the fence about trying this bawdy, satirical, (often appalling) action-packed book, then maybe now is the time!
Posted by Victor Gischler at 6:44 AM

Look forward to this one.

In the mean time, have you seen this?