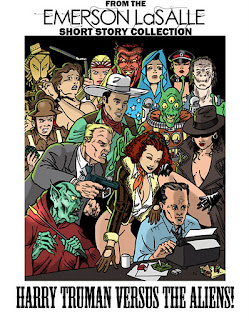 As many of you know, I'm a huge fan of Emerson LaSalle, the obscure pulp writer of over 400 novels who became something of a mentor to me until he was mauled by a bear outside his Calamity, Idaho home in 2007. He is responsible for amazing novels like Vixen Shamus, Sheriff Dracula, Time Meddlers, Spaceport Floozy, Sky Hussy and others. I was gratitfied to learn than the sparks of a new LaSalle renaissance had begun, and Big Fake Press was set to begin reprinting his works -- beginning with There Are Aliens Behind Uranus, Mr. President coming later this year.

The short story "Harry Truman vs. The Aliens" acts as a sort of prologue for There Are Aliens Behind Uranus, Mr. President, and you can get the story on kindle for FREE right here if you're an Amazon Prime member. Grab it. Serves as a great primer and intro to LaSalle's work.

For more information on Emerson LaSalle, check out HIS WEBSITE.
Posted by Victor Gischler at 6:02 AM